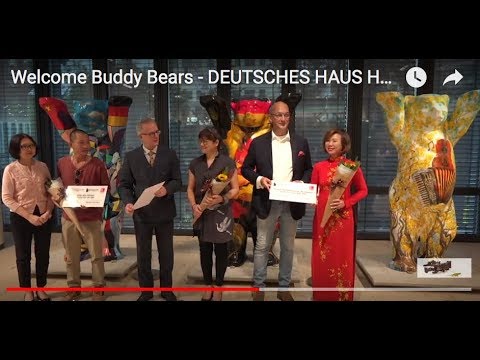 MR. ANDREAS SIEGEL, CONSUL GENERAL OF GERMANY IN HO CHI MINH CITY speaks to the guests and the 3 artists in the Deutsches Haus Vietnam. The artists get awarded for their wonderful work with the Buddy Bears. Hosts are Mr. Andreas Siegel and Mr. Elmar Dutt.

Within the framework of an artist contest in the first half of 2018, many Vietnamese artists have sent their painting designs for the Buddy Bears with their artistic interpretation in regards to German-Vietnamese relations. The 10-member jury including artists, representatives of Deutsches Haus Ho Chi Minh City, the German Consulate General and the Art Museum in Ho Chi Minh City, have selected three outstanding competition entries. In early August 2018, three artists have embarked on painting the Buddy Bears. The Buddy Bears, painted by Mr. Nguyen Duy Nhut, will have his new residence in the Consulate General of Germany, while the other two painted Buddy Bears, by Ms. Tran Thuy Linh and Ms. Viet Thi Kim Quyen, will be displayed in the lobby area of Deutsches Haus Ho Chi Minh City.

The Buddy Bears were officially presented the first time at 11:30 a.m on September/28/2018, together with their artists. The handover ceremony took place on the 2nd floor of Deutsches Haus Ho Chi Minh City.

Deutsches Haus Ho Chi Minh City has all state-of-the-art facilities and services one would expect from a centrally located premium grade office building. The building is home to the Consulate General of the Federal Republic of Germany, making it the destination for German companies and promoting German and Vietnamese relations.
Modern German technology coupled with a high degree of sustainability will provide innovative commercial office space of exceptional quality.