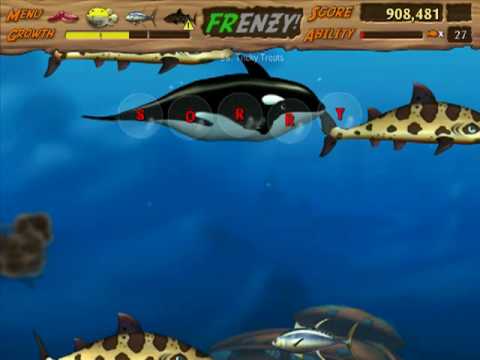 Feeding Frenzy 2: Shipwreck Showdown is an arcade-style video game involving the marine food chain. It is also the sequel to the 2004 title, Feeding Frenzy. The game was developed and published by PopCap Games.

As in Feeding Frenzy, players have to control several fast growing marine predators who are out to uncover a mystery which is lurking in the ocean. The aim of the game is to avoid predators and obstacles while eating other smaller fish and creatures, eventually reaching the top of the food chain. Feeding Frenzy 2 includes 60 new levels which feature scenery such as new underwater worlds, coral reefs, deep sea caves, and sunken ships, as well as above water challenges. The story mode starts the player as a small butterfly fish named Boris. The player has to eat and chomp his or her way to the top of the food chain. Along the way, the player meets new creatures, both friendly and unfriendly.