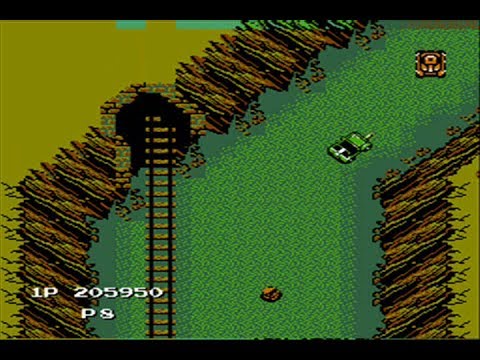 Donate (PayPal) to support my channel:

Player:Heroes Of Xanadu – There are six stages for you to perform your various killing tactics, like some NES games, the stages eventually get hard.Your jeep is equipped with normal standard ammunition, and grenades or rockets, and both players can choose to squash the walking enemy soldiers with their Jeep.

Jackal ( Tokushu Butai Jakkaru?, “Special Forces Jackal”), released in North America for the arcades as Top Gunner, is an overhead run and gun arcade game released by Konami in 1986.The Jackal squad, a four-man team composed of Colonel Decker, Lieutenant Bob, Sergeant Quint and Corporal Grey, is sent to rescue soldiers kept as hostages by the enemy. One or two players control the teams in an armed jeep, which must venture through several enemy strongholds to rescue comrades.In each of the six levels, the goal is to rescue POWs from various buildings and then transfer them to helicopter dust-off

locations. Once the soldiers are secure, the player(s) must then proceed to defeat the boss at the end of each level. In the last level, there are two bosses that must be defeated.As with most run and gun games, there is a point system that can grant the player extra lives depending on the score attained. If a collision occurs with an enemy or the jeep is hit by an enemy bullet, a life will be lost.Some buildings contain one flashing prisoner; if this man is rescued, the jeep’s primary weapon will be upgraded. In addition, if enough prisoners are rescued, a weapon upgrade will be yielded during the unloading process

to the rescue helicopter. The Jeep’s initial weapons consist of a machine gun and a grenade launcher. The grenade launcher can be upgraded into a rocket launcher, which can be further upgraded to shoot long-range missiles, and two kinds of spread missiles,one more powerful then the other.The original Japanese version (Tokushu Butai Jackal), the world version (simply titled Jackal), and the North American version (Top Gunner). In the Japanese version, the machine gun shoots in whatever direction the player’s jeep is facing, whereas in the worldwide and North American versions, it is fixed so that it always shoots

north. In the North American versions, the generic orange and blue flags on the players’ jeeps are replaced by an American flag on each one.The final boss is equip with two cannons.In Japan, a Family Computer Disk System version was produced titled Final Command: Aka( Final Command: The Red Fortress), which was released on May 2, 1988. A cartridge conversion for the Nintendo Entertainment System was released under the Jackal title on September 1988 in North America. The NES version has a number of changes made when compared to the famicom System version released before in Japan.